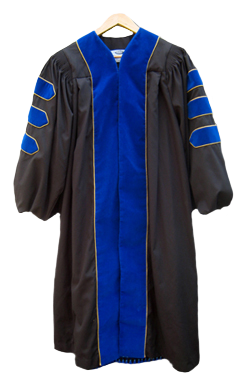 Sally lived in Rajasthan for a year while doing research for her dissertation, so I wanted the inside of her robe to illustrate her love for India. At first, I thought Sally’s robe might be a little difficult to work with, because there are so many different colors going on that don’t seem to match. Her hood is orange and yellow (not shown here), while the robe itself is black with blue bars edged in gold. Conveniently, India loves bright colors, so I was able to come up with a design that wove them all together.

Though the Taj Mahal is not actually in Rajasthan, but next door in Uttar Pradesh, it’s probably the most recognizable landmark in India, so I decided to incorporate this gorgeous piece of architecture into the robe. Sally has taken two sociology/anthropology study abroad groups to India, and they both visited the Taj as part of their travels. I also liked that the Taj Mahal (built in the 17th century to honor the memory of emperor Shah Jahan’s third wife, Mumtaz Mahal) is known as a symbol of eternal love. Conveniently, the Taj is also just the right shape for the space inside the robe. 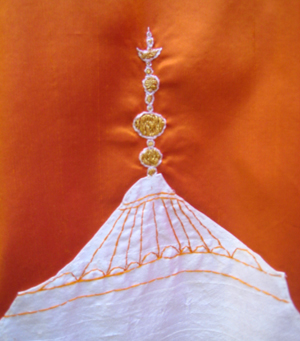 Here’s a detail shot of the embroidery I did at the very top of the Taj Mahal. The whole thing is one large appliquéd shape of white dupioni silk. Then I added details using lots of embroidery, sequins, and a few beads. (See below.)

I got the shape of the Taj Mahal by enlarging a photo from the web to the right physical dimensions in Photoshop (after measuring the bottom edge of the robe about 17 times), printing it out in sections, and then taping the whole thing together to make a pattern I could trace onto what I hoped was the right size white silk.

The background is also silk… a special kind that is woven so that one side is bright orange, and the other is pink. It matches the orange hood nicely. I used reversed pieces of fabric for the pink appliqué flowers on either side of the Taj. The design of the flowers came from a set of marble coasters that another friend brought us from her visit to India. The coasters were decorated with floral inlay patterns copied from the front of the Taj.

As you might expect, Sally needed to learn Hindi to do her research. I thought it might be nice to include some Hindi text in the design – perhaps a poem that said something about exploring new places. I, however, do not speak Hindi. Clearly, I would need a bilingual anthology of modern poetry in Hindi. So… I asked Amazon.com if it had such a thing. Of course it did. I found New Poetry in Hindi: Nayi Kavita: An Anthology, translated by Lucy Rosenstein. Included in this book is a poem by Kunwar Narain, the English title of which is “Reaching Out.” 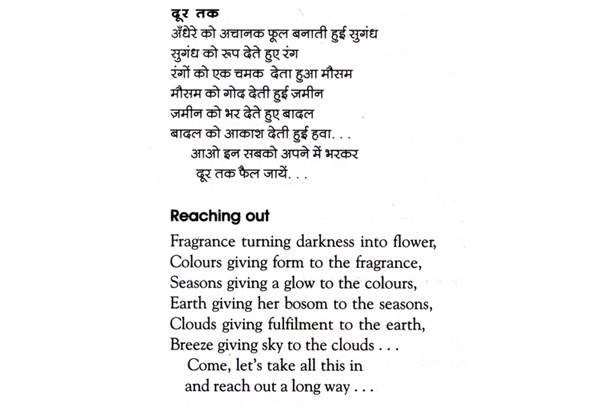 To create a template over which I could embroider the poem, I scanned the Hindi version of the poem from the book, then created a Photoshop document long enough to cover the entire bottom of the robe. I had to be very careful not to mix up the sections when I printed out the poem and taped it together, since (like i said) I don’t read Hindi, and could easily stitch in a typo without knowing it…

Here’s a closeup of some of the poetry. Notice the fancy gold edging and blue tassels. 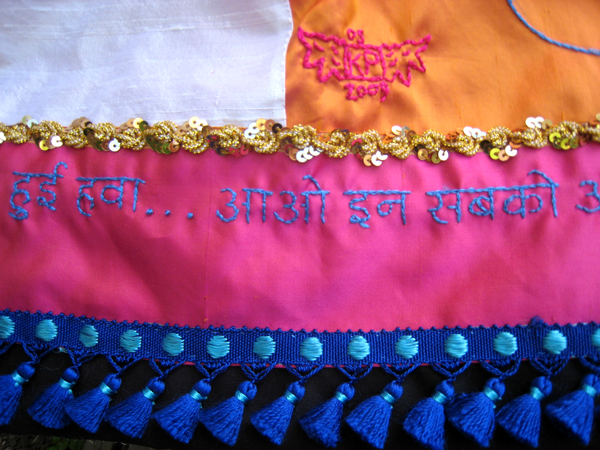 And just in time for commencement, here’s the finished robe. 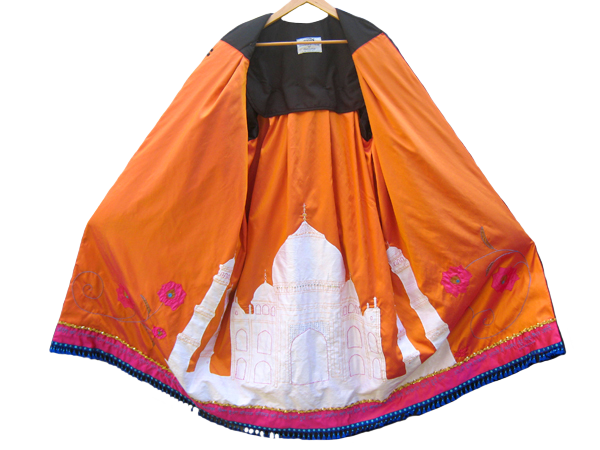