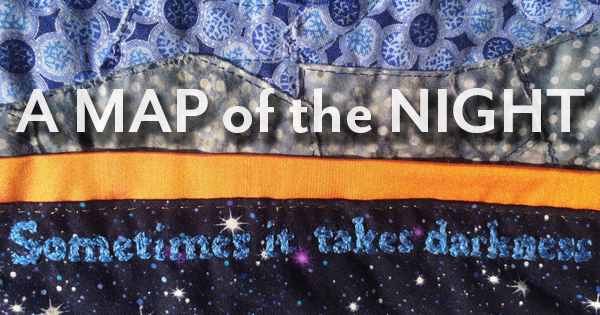 There are no streetlights at the Teton Science School. Night is properly dark. After emerging from a warmly-lit lodge at the close of evening activities, I walk into a wall of black. It takes a few minutes of standing on the path – listening to the rustle of my jacket and the thread of my breath – before I get my night eyes. The easy thing would be to flick on a flashlight. But I often walk right into the Night; navigating the path back to my cabin with my head instead of my headlamp. As worn out as I am after a full day of exploring and learning with the students, I feel my senses expanding in the dark like fishing nets thrown into the ocean. Maybe my nose will catch a curl of woodsmoke. My eyes might find a faint highlight that tells me where the path turns.

During the day, the Principia Upper School Teton Trip was very much about opening oneself to new experiences and observations. The nightly walk back to my cabin gives me a chance to unfold some of those ideas and start to see how big they really are. 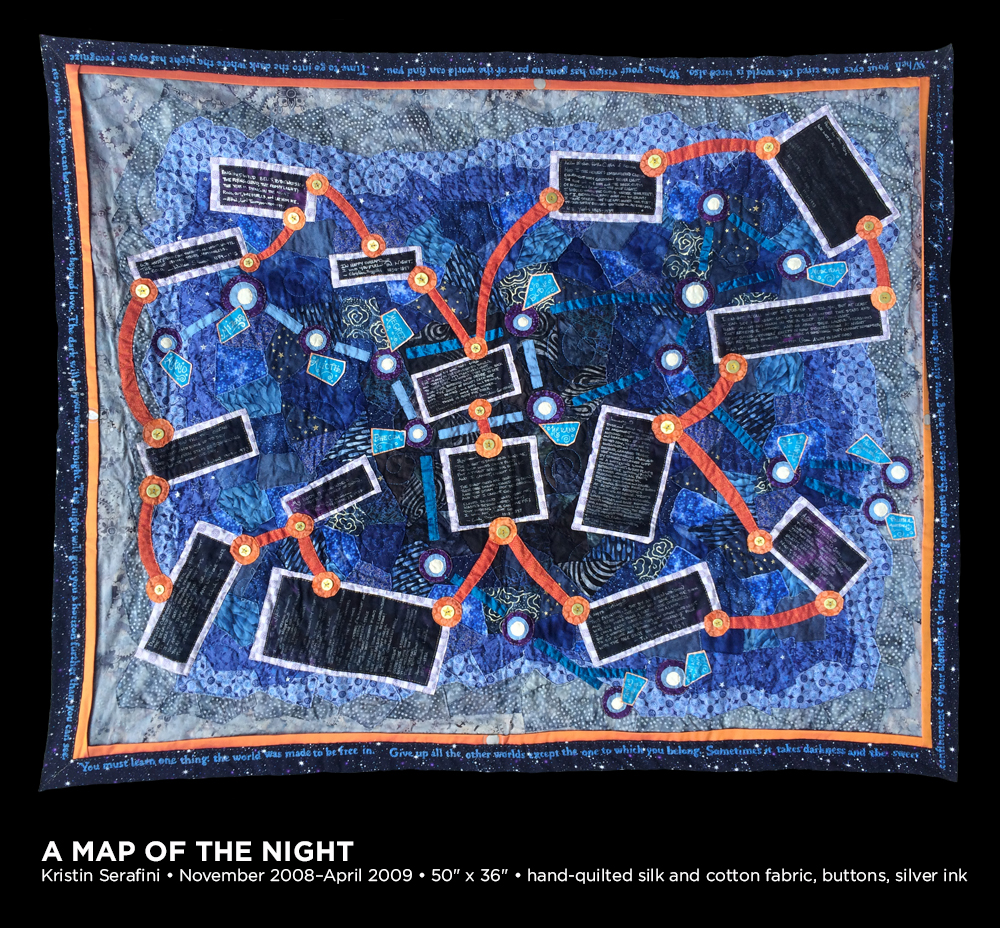 That unfolding is exactly how I would describe the creative process that resulted in this quilt. One morning in November, my phone rang. I was dead asleep after a long night of painting. I answered the call. “Yo. It’s Michael. I am getting on a plane to Scotland in two hours and I’ve lost my map of the Night. Is it at your house?” What is a map of the Night? I wondered to myself. And how would I know if I had one in my house? (I later found out that A Map of the Night is a book of poetry by David Wagoner, but I didn’t know that at the time.)

I started to wonder if I could make a map of the Night. What materials would it require? Would it be like a pirate treasure map? a star map? Instead of jumping right into it, and coming up with an easy small answer, I decided to see what would happen if I just left the idea alone for a while – to see how big it would get.

Eventually, (when I least expected it) things started to happen. It occurred to me that a map of the Night should be somewhat portable, and also durable. It should be literal, and yet also metaphorical. (Wait – how is that even possible?) It felt like I was watching something being created, instead of making it myself. Just like walking out into the Night without a headlamp, I couldn’t see two steps in front of me.

My map of the Night turned out to be a quilt that I can fold up and put in my backpack if necessary. And it actually includes two types of maps: a star map and a mind map. I chose the constellation Ursa Major (whose tail is the Big Dipper) because during winter nights in Jackson Hole, it’s right overhead. On top of the star map is layered a sort of mind map, made from various poems about the Night. 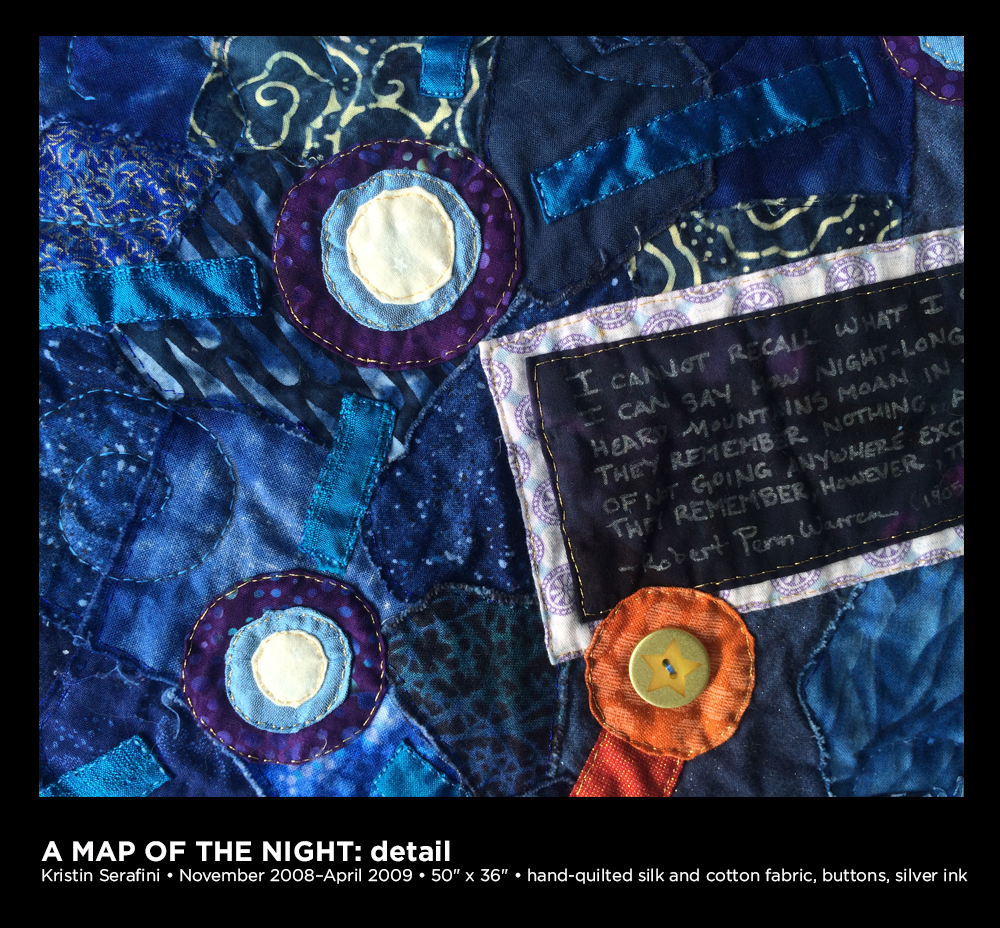 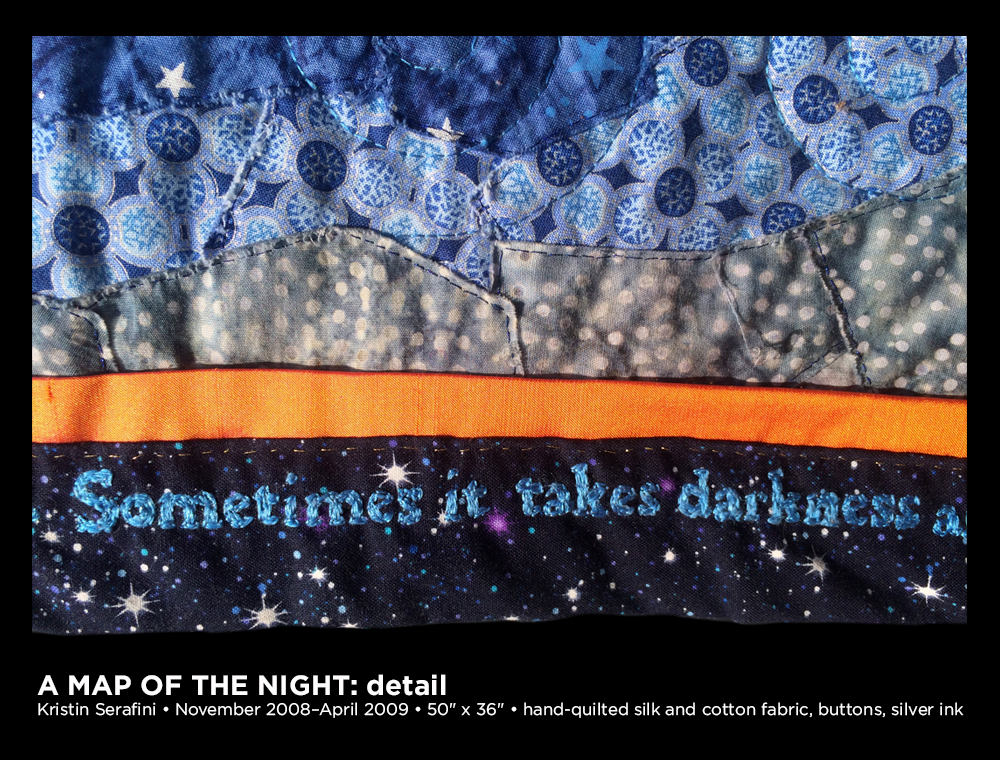 A MAP OF THE NIGHT, showing placement of poems 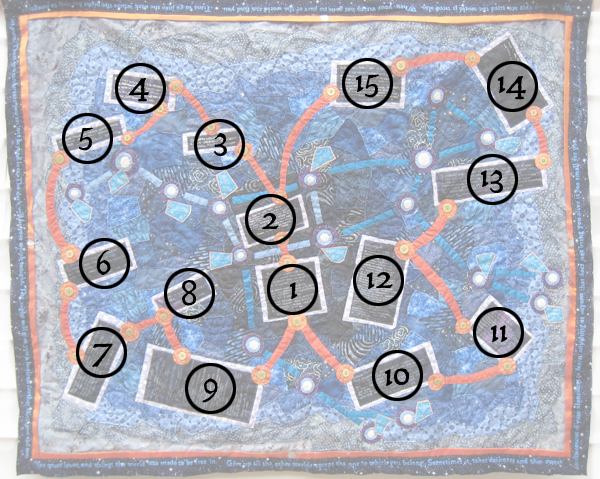 The night is darkening round me,
The wild winds coldly blow;
But a tyrant spell has bound me
And I cannot, cannot go.

The giant trees are bending
Their bare boughs weighed with snow.
And the storm is fast descending,
And yet I cannot go.

Clouds beyond clouds above me,
Wastes beyond wastes below;
But nothing dear can move me;
I will not, cannot go.

In happy dreams I hold you full in night.

We must endure our thoughts all night, until
The bright obvious stands motionless in cold.

I’ll love you till the ocean
is folded and hung up to dry
and the seven stars go squawking
like geese about the sky.

Doesn’t everyone want to feel in the night
the beloved body, compass, polestar,
to hear the quiet breathing that says
I am alive, that means also
you are alive, because you hear me,
you are here with me. And when one turns,
the other turns—

My body is your world under a blanket of snow.

I heard the trailing garments of the Night
Sweep through her marble halls!
I saw her sable skirts all fringed with light
From the celestial walls!

I felt her presence, by its spell of might,
Stoop o’er me from above;
The calm, majestic presence of the Night,
As of the one I love.

I heard the sounds of sorrow and delight,
The manifold, soft chimes,
That fill the haunted chambers of the Night,
Like some old poet’s rhymes.

From the cool cisterns of the midnight air
My spirit drank repose;
The fountain of perpetual peace flows there,–
From those deep cisterns flows.

O holy Night! from thee I learn to bear
What man has borne before!
Thou layest thy finger on the lips of Care
And they complain no more.

Peace! Peace! Orestes-like I breathe this prayer!
Descend with broad-winged flight,
The welcome, the thrice-prayed for, the most fair,
The best-beloved Night!

This evening, I sat by an open window
and read till the light was gone and the book
was no more than a part of the darkness.
I could easily have switched on a lamp,
but I wanted to ride this day down into night,
to sit alone and smooth the unreadable page
with the pale gray ghost of my hand.

This is thy hour O Soul, thy free flight into the wordless,
Away from books, away from art, the day erased, the lesson
done,
Thee fully forth emerging, silent, gazing, pondering the
themes thou lovest best,
Night, sleep, death and the stars.

Dusk and snow this hour
in argument have settled
nothing. Light persists,
and darkness. If a star
shines now, that shine is
swallowed and given back
doubled, grounded bright.
The timid angels flailed
by passing children lift
in a whitening wind
toward night. What plays
beyond the window plays
as water might, all parts
making cold digress.
Beneath iced bush and eave,
the small banked fires of birds
at rest lend absences
to seeming absence. Truth
is, nothing at all is missing.
Wind hisses and one shadow
sways where a window’s lampglow
has added something. The rest
is dark and light together tolled
against the boundary-riven
houses. Against our lives,
the stunning wholeness of the world.

I cannot recall what I started to tell you, but at least
I can say how night-long I have lain under the stars and
Heard mountains moan in their sleep. By daylight,
They remember nothing, and go about their lawful occasions
Of not going anywhere except in slow disintegration. At night
They remember, however, that there is something they cannot remember.

We were alone one night on a long
road in Montana. This was in winter, a big
night, far to the stars. We had hitched,
my wife and I, and left our ride at
a crossing to go on. Tired and cold–but
brave–we trudged along. This, we said,
was our life, watched over, allowed to go
where we wanted. We said we’d come back some time
when we got rich. We’d leave the others and find
a night like this, whatever we had to give,
and no matter how far, to be so happy again.

Had I the heavens’ embroidered cloths,
Enwrought with golden and silver light,
The blue and the dim and the dark cloths
Of night and light and the half light,
I would spread the cloths under your feet:
But I, being poor, have only my dreams;
I have spread my dreams under your feet;
Tread softly because you tread on my dreams.